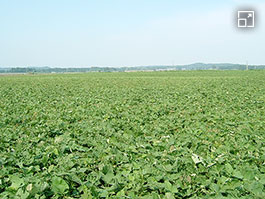 The Watanabe Distillery cultivates Kogane Sengan sweet potatoes—the ingredients of its shochu—on their own land. The distillery has 3 hectares of fields in Tanocho, where approx. 80% of the sweet potatoes used in their shochu are grown.

Because these sweet potatoes are cultivated with hardly any pesticides, caterpillars eat the leaves—once, all the leaves disappeared in just one night! However, between when they are planted in spring and harvested in autumn, the sweet potatoes are left to grow in the earth as big and fat as possible, producing high quality sweet potatoes packed with starch. 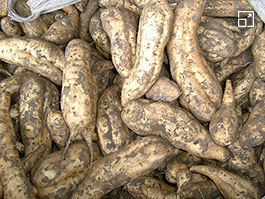 Brewing shochu according to the climate

Explains CEO Koichiro Watanabe, “Generally, sweet potatoes are carefully washed to remove dirt before they are used. This produces high quality, clear shochu. However, we are not fanatical about removing dirt. This is because microorganisms and wild yeast also live in dirt, including ones that are suitable for fermentation. Our thinking is to produce shochu using the soil in which the sweet potatoes are grown and the environment overall.”

Focus on production and taste

Aiming to produce the most delicious shochu of the year 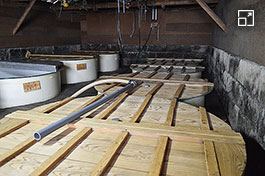 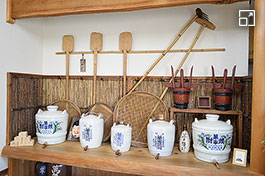 The concept of “Brewing shochu according to the climate” is also applied to the production process. While many distilleries meticulously manage the temperature of the moromi (main fermenting mash), the Watanabe Distillery is more inclined to “leave things up to the moromi”. The moromi mash is stirred, if necessary, but is not forcibly cooled.

Says Mr. Watanabe, “Rather than being too hands-on, we let the microorganisms do their thing as much as possible and only lend a hand when there’s a problem—watching over the mash from a distance, you could say.” He adds that doing this produces a richly individual shochu with a deep, rich taste.

The distilled shochu is then left to age slowly for about three years before shipment.

Go to the Introduction Page for Watanabe Distillery brands.