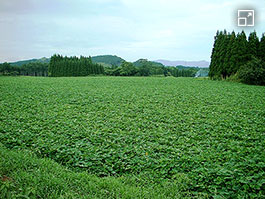 Living with the soil

Aiming to achieve “natural, environmentally friendly shochu-making”, Kyoya Sake Brewery has been cultivating sweet potatoes and Aigamo rice using organic fertilizers (no pesticides) for more than 15 years though their subsidiary, Aguri Comp any, which is an agricultural production corporation.

Kyoya Sake Brewers produces numerous brands of shochu made from red sweet potatoes grown in the Otsuka district of Kushima City, including their representative shochu KAMESHIZUKU. Production is carried out all-year round, on this particular day it was possible to see huge quantities of sweet potatoes being peeled by practiced hands. Those sweet potatoes that pass the master brewer’s strict inspection go into the steamer where they are gently steamed by the Cornish boiler producing soft, humid steam. The rice for koji-making is similarly steamed in a drum; koji mold is added and the mixture left to rest overnight before being placed on a triangular shelf for koji propagation.

Huge pots embedded in the ground are used for both the first and second mashings. Careful attention is paid to temperature management as fermentation is monitored. The egg-shape of the pots enables natural fermentation without excessive human interference because they allow natural convection and have only a small capacity (approx. 800 liters per pot). 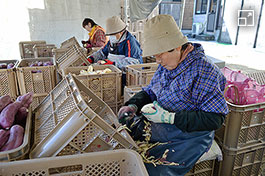 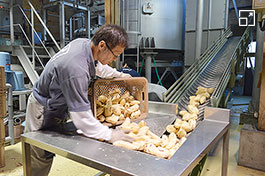 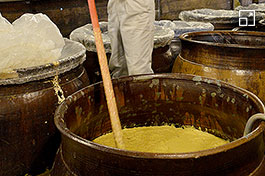 Aiming for even clearer shochu quality 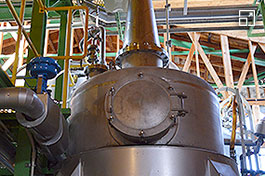 The distillery uses two types of distillers, decompression and atmospheric. Approx. 70% of shochu is made using decompression distillation. These distillers are characterized by the long, narrow chimney-like part protruding at the top. This shape apparently prevents the smell and bitterness of the moromi from rising, producing a clearer shochu. Incidentally, the building where the distillers are housed was constructed using locally grown Obi cedar.