The sweet potato ingredients used are Kogane Sengan sweet potatoes, which are produced in Miyazaki Prefecture with an emphasis on the land and cultivation method. Just-harvested sweet potatoes are processed the same day. The rice used is Thai rice. Mr. Kawagoe explains, “Actually, shochu’s roots lie in Thailand. So Thai rice is suitable for shochu-making.” 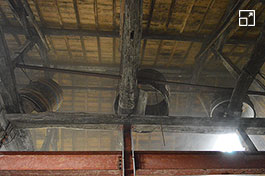 Since the mashing room was built at the end of the Meiji Period (1868–1912), the faint aroma of koji has pervaded the air. The first mashing pots imbedded in the floor during the Taisho Period (1912–1926) are said to be Bizen ware. Each is a slightly different shape and has its own personality. There is no air-conditioning in the distillery; while taking the outside temperature into consideration, the distillery artisans use their five senses of sight, smell, touch, etc. to promote fermentation, drawing out the maximum flavor of each ingredient and jar.

The distillation method used is atmospheric distillation. This produces a shochu that enables you to feel the rich flavors of the sweet potato and rice ingredients. 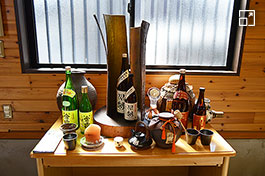 Mr. Kawagoe began helping out with the family business when he was 26 years old. Before that, he worked in a film-related industry. With the environment and social situation surrounding shochu changing at a dizzying pace, Mr. Kawagoe said that he had seriously considered the distillery’s future. “We formulated a meticulous plan based on awareness of the kind of shochu-making we wished to pursue within the limited distillery space. This plan was completed in 2009, and although it is still evolving bit-by-bit, the plan is on track.”

Says Mr. Kawagoe, “There is a limit to how much shochu one master brewer can make. For this reason, we place importance on improving quality, not quantity.” Over the distillery’s long history, they have produced various brands, but this has been narrowed down so that today they produce three brands that are only distributed to trusted retail stores. Says Mr. Kawagoe, “Moving forward, I intend to continue pouring every effort into shochu-making.”

How to enjoy the best flavor when drinking shochu 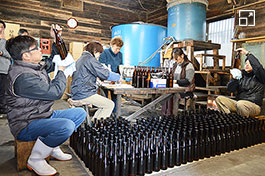 Bottling, inspection, and labeling are all carried out by hand. The shochu produced by Kunitomi Town’s only remaining distillery is a true gem produced over accumulated time from carefully selected ingredients with the artisans’ skill and abundant affection.

Go to the Introduction Page for KAWAGOE DISTILLERY brands.